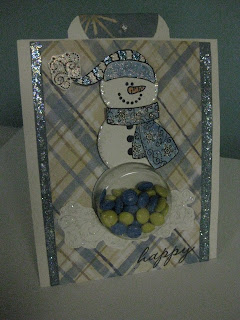 Here are some very fun cards that I made. They are a great way to send a card and gift all in one!  The sweet treats are a special touch that your family or friends will love.  The pull tab on the top allows you access to the treats without destroying the card so you can REFILL.  I made one for Halloween and sold it to the first person to see it!
Asking price $5.00                                EMAIL ME
Size is 4 1/2 x 5 1/2 plus pull tab
The first one is a snowman with blue and yellow M&M's inside, happy on the outside and holidays on the inside.
The far left below is a Santa with all colors of M&M's inside, with Merry Christmas and Happy New Year on the outside and Joy is not in things; it is in Us.  Richard Wagner.  the last one below is another snowman with only red and green M&M's inside, snowfriends on the outside and Snowfriends come and go with the seasons, but Real Friends last forever.
YOU MUST SEE THESE ADORABLE cards.  They will be at the Rice Lake Library on Nov. 8th from noon till 5:00 along with other completed projects.  Come get yours then.  First 15 visitors will get a free Christmas card compliments of the Rice Lake Library.
Orders will be taken and filled starting Nov. 11 thru Dec. 10th.  Please make your order as early as possible to insure your order will be filled. 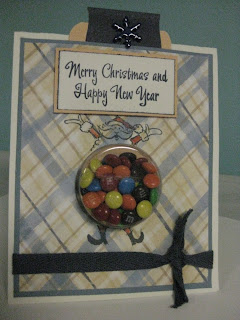 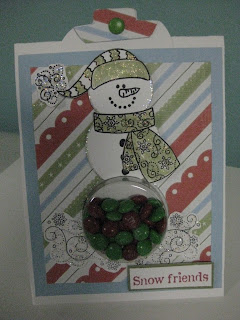 Posted by Unknown at 1:35 PM No comments:

My youngest son is now a Sailor!

What a handsome young man he is!  We went to see him graduate from Navy Boot camp October 14th.  There were thousands of people there.  Each recruit was allowed 4 visitors.  There were 861 graduates so that makes the visitors about 3000!  It was a very special graduation because the announcer said that this was the exact same day they had their first graduation from Navy Boot camp (in a different building than what we were in) and it was also 100 years to that very date!  They graduate a class EVERY weekend of the year.  How awesome is that!  So if you do the math here is what you have:  Average graduating class is about 930.  Times that by 52 weeks per year for 100 years and you have a whopping 4,836,000 men and women who have graduated from our US Navy!!!
Now more about Brandon.  He was very excited about the Navy before he went in and now he is even more excited.  Boot camp did not seem to hard on him, but we did do a lot of mental preparing for it too.  He is still his fun loving, tender and friendly self.  His focus will shift now because, "Now that boot camp is done, I can think about my future!"  He made it, he passed, he endured!  Now life begins.
At his graduation there were the four allowed: Ron and I, his sister Laura and Brandon's father Craig.  On Saturday we spent most of the day together.  We played GLOW IN THE DARK miniature golf and have a blast.  Although he was free to visit with us on Sunday also we were not able to meet.  We were leaving early that morning and Brandon did not want to miss mass so we parted way on Saturday night.
Through this whole process I did not feel I needed to shed a tear but when I realized that he will be going on a ship soon, I started to cry.  Tears of joy and pride but also because he could be on the other side of the world in a few months and we could loose track of each other.
My son had two very nice surprises for me.  The first was a very large package of pictures that he ordered for me of the pose above and of his division.  They were on our doorstep when we got home.  The second was that he now has a phone and we can talk as much as we want.  Snail mail sure was discouraging during boot camp.  He also has internet access, which he did not have before.
As you can see, I could go on and on but I will spare you.  I would like to post some other wonderful things happening in my life.  Thank you very much for stopping and visiting.... see you again real soon!  Theresa

Host your party on line Blogs I visit most 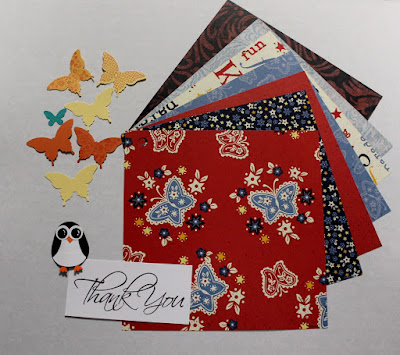